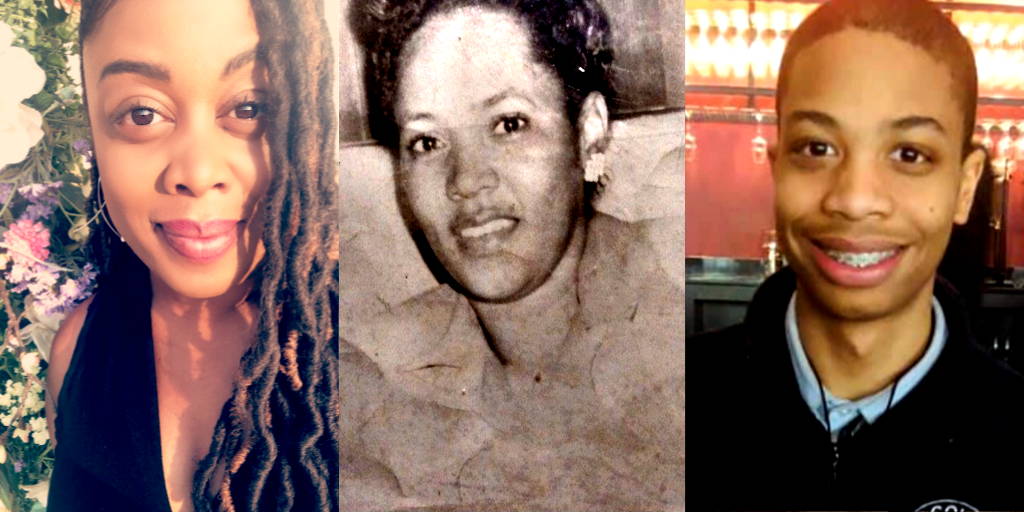 I want to personally thank you for being here and taking the time to learn more about our story. I have always had an interest in the human body and how it functioned ever since I was a little girl. My grandmother (pictured above in the middle) had several big books on human anatomy, herbs, pharmacology, and symptoms with natural remedies that she kept on her desk in her bedroom. I was drawn to these books and would study them for hours.

The more I read and learned, the more I believed in the wisdom and power of nature. My grandmother, Azilee being of Cherokee heritage was at one with nature. She would rise at 5 a.m. every day. She would pray, eat some fruit and go out into the garden tending to the vegetables, herbs and flowers. By the time I woke up in the morning, I knew exactly where to find her...outside with her hands in the earth!

She would call me over to join her and talk to me about the vegetation and make me help her plant as well as harvest. I never liked it as a child because I was squeamish about the bugs and worms :), but I did love the knowledge that she would pour into me and the stories she would share about her parents...especially her father's tonics! My attention was laser-focused on everything she taught me and every story that she shared. Little did I know how much I would need and use her wisdom, long after she was gone.

Over the years, I became the go-to source for health and wellness for those that knew me in that capacity. I was flown all over the country to consult with various companies on best business strategies as well as to offer advice on their product line. I was able to add on to what I learned from Grandma through each of these experiences. I've sat with some of the world's greatest nutritional scientists and have seen first hand what it takes to be the best of the best when it comes to quality.

Now I'm going to fast forward to how this company started. When my Kobe (pictured above on the far right) was 11 years old, he came to me saying that his skin was itching and burning. When I checked his skin out the first time, there was nothing there. Within a few hours, there were lesions all over his body.He began to experience pain with it and I became desperate for help.

I took him to the emergency room at the local Children's Hospital. They gave us a prescription for a steroid cream and sent us home with no real diagnosis as to what it was. Over the course of one year, I took him to several specialists looking for answers. He had several rounds of blood work and a biopsy, but still no conclusive results.

The final straw for me occurred one evening when I found my son blacked out in the kitchen. I rushed him to the emergency room once again. As I was driving, tears streamed down my cheeks both out of frustration and desperation! I began to pray asking God for a doctor that could finally give us a real solution and to ease my sweet boy's suffering. At that moment of prayer, I had a massive revelation that came to me in the form of a question. The question was "Why are you going back and forth to the doctor and the hospital when you know what to do?" If I wasn't driving, that question would have stopped me in my tracks!

I proceeded to the hospital with him, but this time I had a brand new attitude about the situation! A new confidence sprang forth within me! I had been the one to help so many people, but for some reason when it came to my son, I was looking for someone to help me! I prayed again and said, "Okay God, I need a formula." I have always been a deeply spiritual person and believed in the power of prayer.

I decided not to fill the prescription but instead wait for the divine inspiration that I knew was coming. In a matter of days, I had the formula that later became known as "Power Boost" which is a combination of what I learned from Grandma Azilee and the modern scientists that are on the cutting edge of tapping into the power of natures healing power. I knew that I would do whatever it took to source the cleanest ingredients that I could find because as a mother, I am very deliberate in not giving my children anything harmful.

Once the formula was complete, I gave it to Kobe to take internally and also applied it directly to his skin. In less than a week every lesion was gone from his skin and only the "shadow" of what had been there remained. He is almost 15 years old now and has not one recurrence of the lesions, nor any more pain or blackout spells! I was so elated that I put a post on Facebook sharing only a couple of lines about how I was finally able to solve his skin condition after battling it for a year. From there, the rest was history!

I got several inbox messages from parents as well as from physicians that wanted to learn more and order some for themselves! Word began to spread about our formula and the next thing I knew, we were in business! I didn't set out to start a company...I was just a mom that was desperate to help her son. When I look back on it, it was the love and teaching of my grandmother that truly began this journey, and the deep love I have for my son is what started this company.

Now that Kobe is all better, I have made it my mission to continue to innovate with products that can be used in our everyday lives. I'm so blessed that I get the honor of sharing the love with families all over the world through our ever-expanding product line!

Every batch of every ingredient is tested before it is formulated to make sure that it is free of molds, mildews, pesticides, fungicides, and herbicides. "Consciously Beautiful" is a term that came to me at the same time as the company name. I want people to be conscious of what they put in and on their bodies and to expect a standard of excellence when it comes to clean, quality ingredients. Only the best will do for my family, and only the best will do for yours!

This foundational formula in Power Boost made my Kobe's skin beautiful again. He has renewed energy and I'm happy to say that he is is healthy and thriving!

WHERE WE ARE TODAY & WHERE WE'RE GOING!

Bellativa has evolved from just being about the Power Boost formula to the continual formulation of other products for everyday use across a variety of categories. Stay tuned to see all of the exciting opportunities ahead to partner with us and to experience amazing new formulas!